If your dedication to Japanese food is anything like as strong mine, you’ll know that the search for decent Japanese cuisine this side of Tokyo is a task that can take you anywhere from backstreet diners to high-end Michelin-starred venues. So it was with great excitement that I discovered Murakami, newly opened in the summer of this year amid the chain restaurants of St Martins Lane.

Centred around a 12-square-metre “living wall” that plays homage to the five elements of Japanese philosophy – fire, water, earth, wind and sky – Murakami’s interior is strikingly cool, contemporary and urban. The menu takes its inspiration from the popular Japanese Izakaya style of dining, which takes a much slower-paced approach than we are familiar with in the West. Flashback to my days spent in Okinawa, when I visited a traditional Izakaya establishment, which involves sitting on a mat and eating from a low table; thankfully this isn’t quite the Murakami style, as I recall that being one of my most uncomfortable meals. Izakaya focuses on small dishes served when the food is ready, so don’t expect sushi platters to be conjured up in front of you in one go. 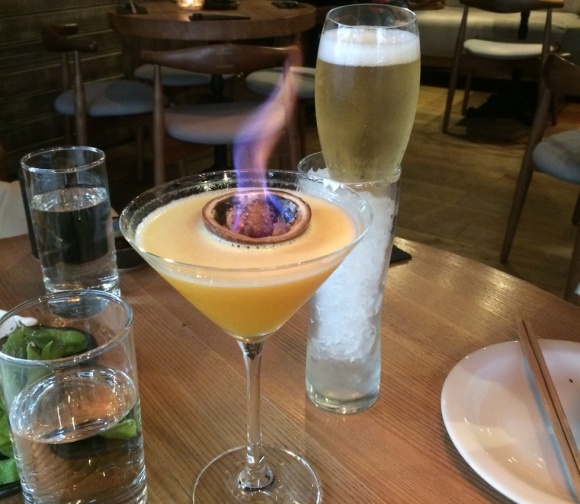 Murakami is worth a visit for the cocktails alone; in fact, I had strictly instructed my date that I was only having one drink for the evening, but three cocktails on, that was well and truly out of the window. The Don’t Be Sake – “a sarcastic twist on the classic Champagne cocktail with peach, chilli, akashi tai umeshu and tartra tea liqueur” – and Spiced Rhubarb Fizz – “a gin fizz laced with lemongrass, rhubarb and bubbles” – were two of the most memorable and commendable. The X-Rated Pornstar is delivered with its passion fruit garnish set alight, a truly impressive display. If cocktails aren’t your thing, the menu also includes a curated list of Japanese sake, whiskies and house wines.

There are several sections on the food menu, and I must say my date and I put in quite a good performance sampling as much of it as we could. For starters, the new-style sashimi – salmon seared in hot oil with yuzu soy – accompanied our first round of drinks. From the soft shell crab roll and crispy baby squid to the lamb chops and ribs, all the dishes were delivered at a relaxed pace, allowing my date and I to enjoy each other’s company and conversation. Other highlights on the menu include the spicy maguro, kara age, dumplings and rainbow roll. 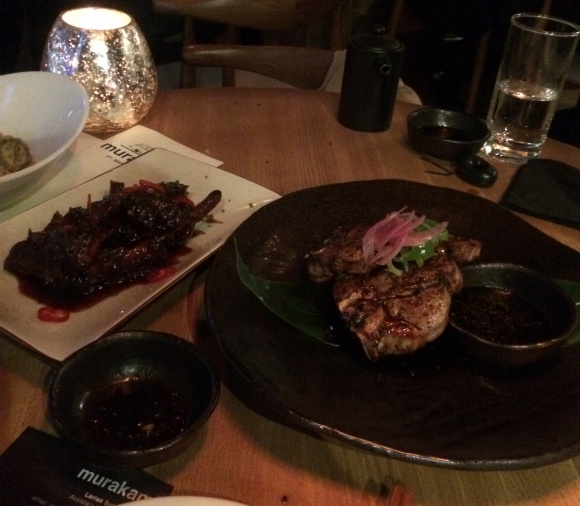 There was absolutely no space for dessert for us, but had that not been the case I would have been sure to try out the green tea cheesecake.

One thing’s for sure: when you find a Japanese restaurant that impresses not only with its food but also with its ambience and service, you stick to it, and Murakami undoubtedly falls into that category. I’ve already arranged a return visit there.

Meet someone worth meeting